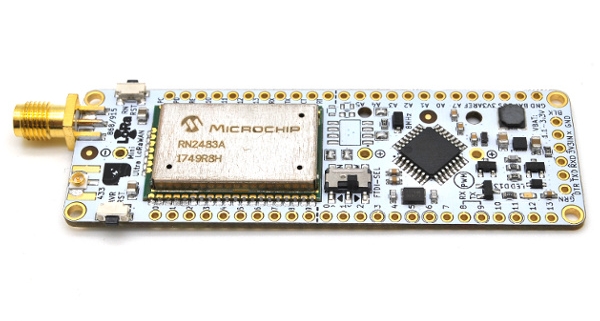 We have been working on a single cell Arduino compatible LoRaWAN low power node for some time now. Many who has been following our work has been asking when will the board will be released. We have to admit this is probably one of the simplest board we have ever design but the testing and validation (whether it’s in the lab or in the real world in sub zero temperature) requires so much of attention and patience. We’ll be talking a bit on the ideas behind this board and what motivates us to perfect it in this article. 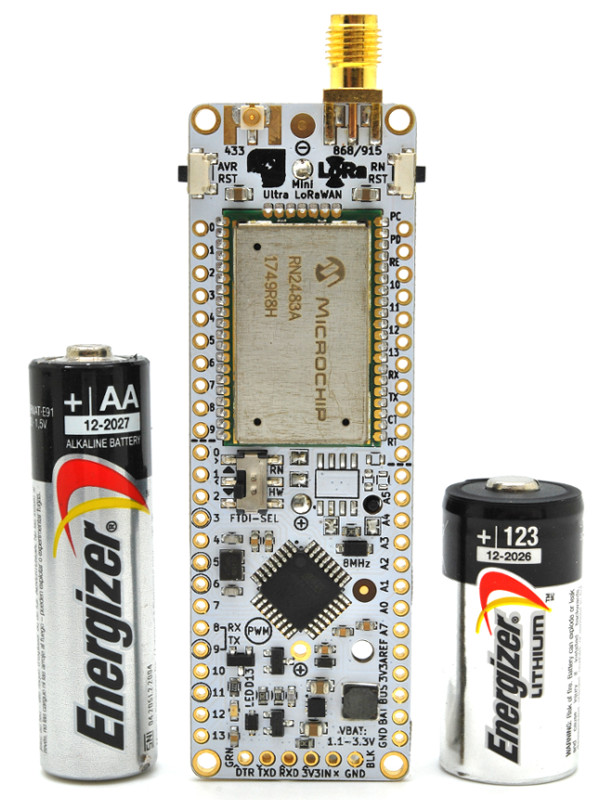 Choice of battery powering your low power wireless sensor node is one of the most crucial criteria that dictate how reliable your node will operate. Throughout the years of making ultra low power node (standalone, wireless), battery type and chemistry used are decided based on several factors. Take a look at our Mini Ultra Pro which is designed to run on Li-Ion or Li-Polymer batteries with solar panel as a charging source. At first glance, it all seems all is well with this setup (boards consumes less than 20 μA during sleep, the battery is charge through an MPPT like power management circuit, solar panel provides plenty of clean energy). But, what if you have the following requirements:

All these points were based on our experience throughout the years of deploying wireless sensor network. Depending on the situation and requirements, we have used both rechargeable and non-rechargeable batteries. Our kind customers has also been giving important feedback on this particular subject. 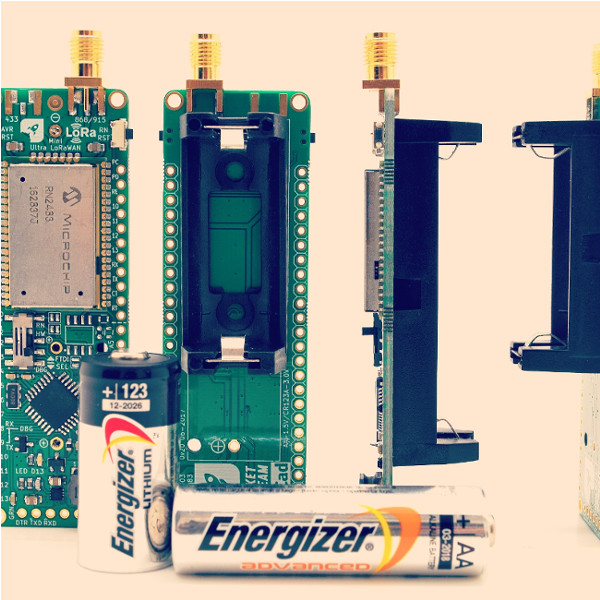 Our Mini Ultra Pro board is equipped with a LoRa module (RFM95W).  LoRa is a low power wireless technology that provides long range capability using spread spectrum modulation at the physical layer. LoRaWAN is a protocol specification built on top of the LoRa technology developed by the LoRa Alliance. When we first design the Mini Ultra Pro with RFM95W, LoRaWAN protocol was still in it’s infancy stage. As times goes by, availability of open source LoRaWAN stack such LMIC enables the Mini Ultra Pro to run LoRaWAN protocol stack and hook onto LoRaWAN network such as the The Things Network (TTN). Ever since then, many off the shelf ready-to-use LoRaWAN certified modules such as Microchip’s RN2483/RN2903 are available to speed up the time to market LoRaWAN capable products. Earlier revisions of the RN2483/RN2903 by Microchip has been buggy (not ultra low power, has temperature stability issues, LoRaWAN stack stability issues, etc) but as time past by, newer revisions of the modules solved many of those issues.

Here’s how our initial napkin sketch looks like. Obviously many changes has taken place since then. 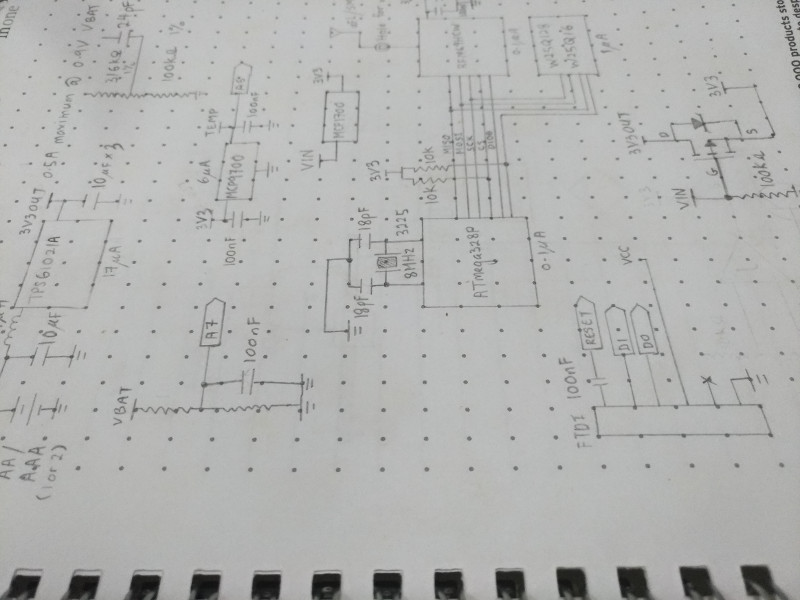 If you don’t read schematics, this is what it means:

We have been sending our prototypes to beta user around the world in order to put the prototypes under real world test and validation. One of our very kind beta tester, Rob (aka BoRRoZ on TTN forum) from  the Netherlands is kind enough to share his test results with the public by publishing the data sent by the prototype units across 9 months on a Cayenne dashboard. Sensor data such as humidity, temperature, battery voltage, and a free running transmission counter is collected. Here’s how the Cayenne dashboard looks like (circa May 2018). 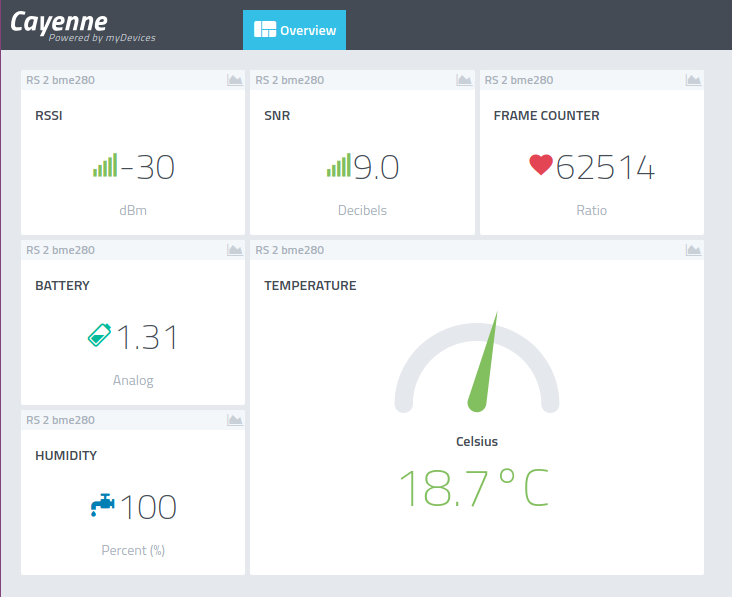 Here’s a latest shot of the Cayenne dashboard (August 2018). 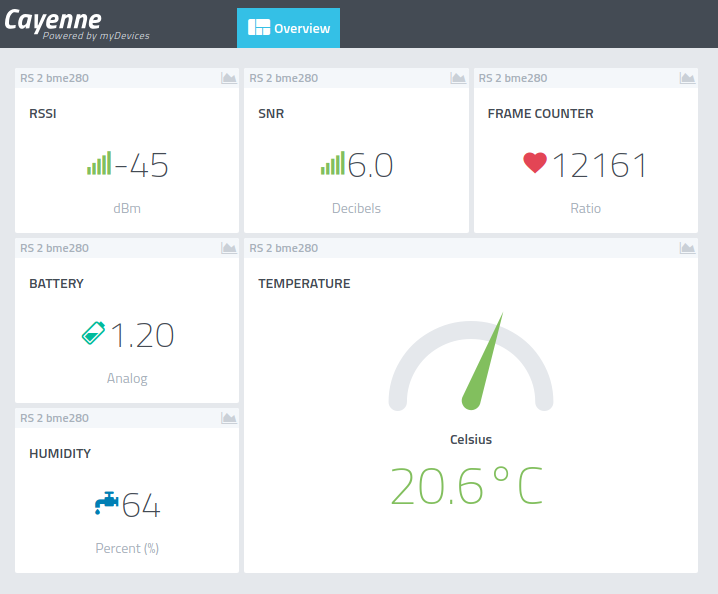 The unit has been running live on the his home 1st floor terrace for about 9 months now on a single cell AA alkaline battery. Unfortunately, Cayenne has lost a big portion of the data dated back to October 2017. The board survived extreme cold temperature below 0 º Celsius with different weather (snow, rain, summer) while still running on a single AA 1.5 V battery with over 60k of data packet sent as of early June (frame counter rolls over upon reaching the upper limit of a 16-bit unsigned type variable, Rob didn’t expect it to go this far and hence the unsuitable variable type!!!). Here’s an image of the prototype unit in the winter. Signal from the unit were received by LoRaWAN gateway located as far as 13 km from the unit using the dipole antenna we carry on our store. 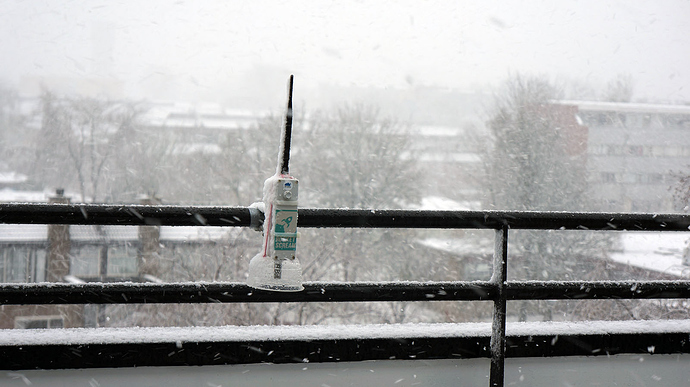 Testing the design in the lab itself proves to be a challenging task as each battery type behaves differently and add different brand into the hat, you find yourself with many scenario to verify. The internal resistance of AA batteries also varies between different chemistry. For example, a zinc-carbon based AA batteries has a larger internal resistance (higher power lost) when compared to a zinc-chloride AA batteries. And zinc-chloride batteries usually has larger capacity when compared to zinc-carbon. There are many more factors that goes into the test equation such as self-discharge rate, initial cell voltage, and maximum output pulse current. And yes, we haven’t start talking about alkaline or Lithium batteries yet here!

So, what now? Is there an end to this prototyping and testing madness?

After prototyping across 5 revisions, we made several changes based on the test carried out and user experience feedback. Here are some of the changes: 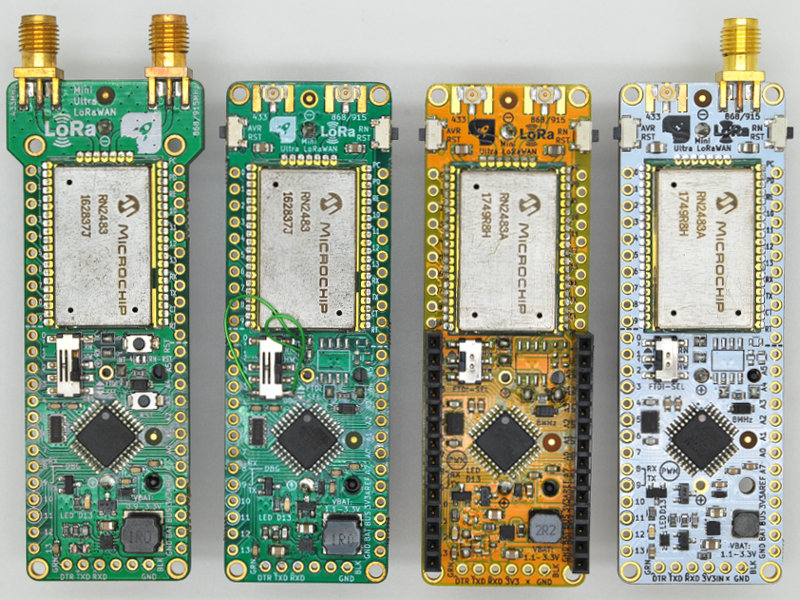 We believe the board is ready for public release now. However, only the RN2483 (EU863-870 version) based version will be released first as the RN2903 (US902-928 version) is still not tested over long term usage on the latest prototype revision. If you are looking to be a beta tester for RN2903 version (US902-928 frequency only), please drop us a mail. Available units are limited and we expect you to have access to a US902-928 frequency band LoRaWAN gateway and is able to push the data from the unit to a public data dashboard such as Cayenne.

We have been requesting Microchip to further support other frequency band such as AU915-928, AS-923 and IN865-867 on the RN2903 and RN2483 modules but it is still a work in progress the last time we were told. So, if you are expecting these modules are able to run on these frequency band, unfortunately they won’t be able to, at least for now.

All parts for the first batch of the boards has arrived while the PCB will reach anytime soon. Main component like the RN2483 module can be very expensive even in bulk for a small company like us. Any pre-order will definitely help us financially in getting more of these modules in hand. As a token of appreciation, we will be offering them at a lower introductory price during the pre-order period. 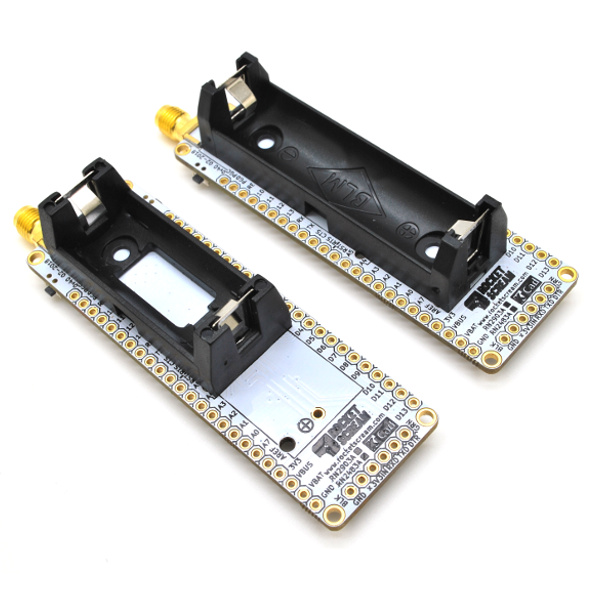 We like to give a big thank you to our fellow beta testers that has been pushing all the prototype units to it’s limit. Without you guys, we wouldn’t have been able to validate the design across different environment and condition. We owe you guys a beer!