Before we started Rocket Scream a few years back, we were using Altium Designer for all our schematic and PCB works. When we left the corporate world to work on Rocket Scream as a full time gig, it was obvious that we weren’t able to fork out a chunk of money for a piece of software like Altium Designer. No doubt, they are one of the best PCB CAD software in the industries but they are not the cheapest around. Back then, the name Eagle always pop out when we came across any open source hardware projects. Open source companies like Arduino, Sparkfun, Adafruit and Dangerous Prototypes (just to mention a few) uses them and the chances that an open source hardware repository hosted on GitHub has Eagle CAD files on them is close to 100%! If you do a Google search on the term “Eagle”, the top search returns the Eagle CAD software instead of the bird (yes, they are that viral)! We looked further around and found several other candidates like Diptrace, gEDA PCB, KiCad, and Design Spark. Along with Eagle, we test drove all of them and revisited them over time to check on their progress. Our aim was a simple and easy to use PCB CAD with affordable price.

We ended up with Diptrace due to it’s super intuitive user interface and great customer support. Free non-commercial version is available if you plan not to make any money out of your projects. The pricing for their software is based on pins (not based on maximum board size like what is imposed on Eagle) and starts from USD75 for 300 pins 2 layer version and scales up to USD895 for unlimited pins and unlimited layer option. The guys behind Diptrace are awesome people and provide the sort of customer support you would have expect from a more expensive package.

Throughout the years, we always give KiCad a go just to check how much they have progress over time. We believe that they would eventually become the de facto PCB CAD software for the open source hardware community. Not until few months back, we found KiCad lacks certain features that we are so used to in commercial package like Diptrace and Altium. Prior to the official 4.0 release of KiCad, we took ourselves to the task of testing KiCad again. We are so surprised that KiCad has became so usable (quite intuitive but with few quirks) and polished in it’s current state. Yes, there are still some areas where improvements are needed (especially the schematic library editor and panelization in PCB editor) but they will get there, eventually. We fell in love with KiCad and has since migrated all our new work to KiCad. We are currently running the daily builds version of the KiCad instead of the official 4.0.x version on our Ubuntu machine. KiCad runs pretty well on Windows too and will run just fine on Mac.

We have published our KiCad schematic and PCB component libraries on GitHub and our very first board made with KiCad is the Arduino compatible Mini Ultra Pro. We hope by using KiCad, everyone can easily use our design without restrictions like those imposed by commercial PCB CAD packages. Till next time, take care and happy sharing. 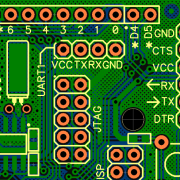 Visit to Neoden Technology – Maker of the Desktop Pick and Place Mach...